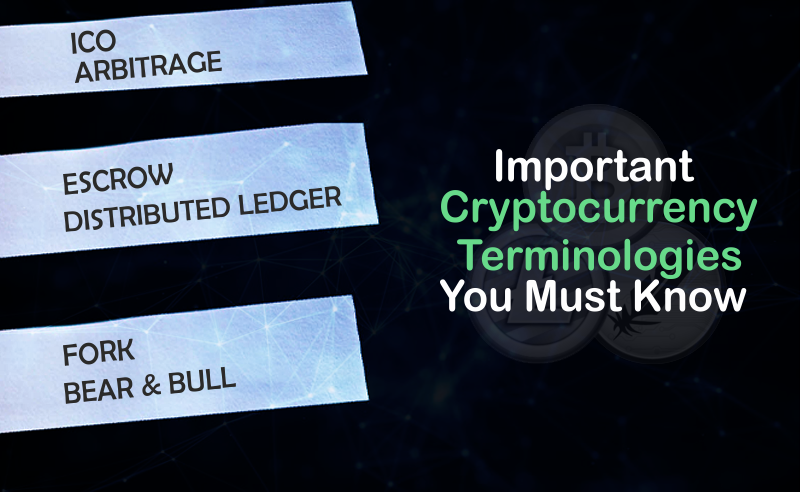 Today, the concept of cryptocurrencies has reached a global level. More and more people are now interested to do trading of digital currencies including king Bitcoin. Not only Bitcoin, but there are also alternate currencies

Today, the concept of cryptocurrencies has reached a global level. More and more people are now interested to do trading of digital currencies including king Bitcoin. Not only Bitcoin, but there are also alternate currencies like Ripple, TRON, NEM, NEO, Ethereum, Monero, Dash and so many to name. But are you sure that you know everything which is linked with cryptocurrencies? Well, if not, then you need to upgrade your knowledge by learning about some important cryptocurrency terminologies in this blog. So let’s go ahead.

Learning about important terminologies in the crypto world is not only essential for a newbie investor but also for a startup business that wants to deal with cryptocurrencies. All these terms play an important role in different aspects of cryptocurrency. So it is advised not to limit your knowledge on a particular topic of interest. There are other important elements in cryptocurrency, which can’t be overlooked.

Before we head on to know about important crypto terms, let us provide you with a brief introduction to cryptocurrency. This small guide is a must for every budding crypto entrepreneur who wants to make a career in this new uprising monetary technology. Crypto as the name suggests means digital. In short, these currencies are digital which works on blockchain technology for trading, buying and selling. These currencies need an electronic device facilitated with better internet speed and prone to malware attacks. To store crypto coins, you need to own a wallet for their security.

Now let’s get back to our main subject which is based on the important cryptocurrency terminologies. Here are they:

Arbitrage is one of the important cryptocurrency terminologies. When the difference between the two different exchanges in terms of price is being taken as an advantage, then it is known as arbitrage.

Now, these terms don’t need any introduction, as these are well-known terms which you often see in economic news. These terms are also used in cryptocurrency by having the same meaning as in the stock market. Just like in the stock market, the decline in value is simply indicated to bear. There is another adjoining term that you might be unaware of and that is ‘bearish’. It is used when a trader expects a cryptocurrency to depreciate.

Contrary to bear, bull means an increase in value. And when the investor seems positive about the future of an asset, then the term bullish is used.

Coming up to more other important cryptocurrency terminologies is escrow. When the financial resources are held by a third party on behalf of other parties, then that third party is called ‘escrow’. When there is no trust between the entities involved in the transaction, then the funds in the escrow are held by the third-party or escrow.

If you are abreast of Blockchain Crypto News, then you must have understood the meaning of distributed ledger. However, in short, it is a technology wherein information is recorded and is distributed across several devices. The best example to quote is blockchain, where most of the digital currencies including the Bitcoin operate and their transactions are been tracked.

Whenever there is a change in protocol or rule in any cryptocurrency, then it is understood to be a fork. The updating of the protocol is done by developers whenever needed. If you understand about the fork, then you will also get to know about what is the soft fork and hard fork in the blockchain. It is among the important cryptocurrency terminologies which you might have heard most of the time.

ICO is also called an initial coin offering. In cryptocurrency, this is one of the important cryptocurrency terminologies which every budding crypto enthusiasts must know about. Its true meaning implies when the digital tokens are provided by the organization for the first time to the masses. The motive behind this activity is to increase money. These are often held by the firms in regard to project financing.

Just like any other field which is filled with terminologies, there are also very important cryptocurrency terminologies that are must understand to explore the digital world of cryptocurrency. If you have been following Breaking crypto news, then you will certainly see the use of these terms. There are many more terms that are as important to know like the ones mentioned in this blog. So you are an active internet surfer, then better check out for other terms along with these important terms that are been explained here. There is so much to explore about cryptocurrencies. It all depends on how interested you are in grasping the terms and understanding it thoroughly.